Sleeper is hailed the ‘It’ dress brand of the summer as celebrities like Dakota Fanning, Lena Dunham, Leona Lewis and Vanessa Hudgens flock to buy the Atlanta frock

Sleeper has been hailed the ‘It’ dress brand this season as celebrities and influencers have been flooding our Instagram feeds with images of them in their highly-coveted garments.

One item from the popular US brand, the Atlanta linen dress, has been a huge hit with a number of famous faces.

The Atlanta dress from the American label is 100 per cent linen, features an elasticated area across the chest and flows out around the waist in a feminine and elegant cut. 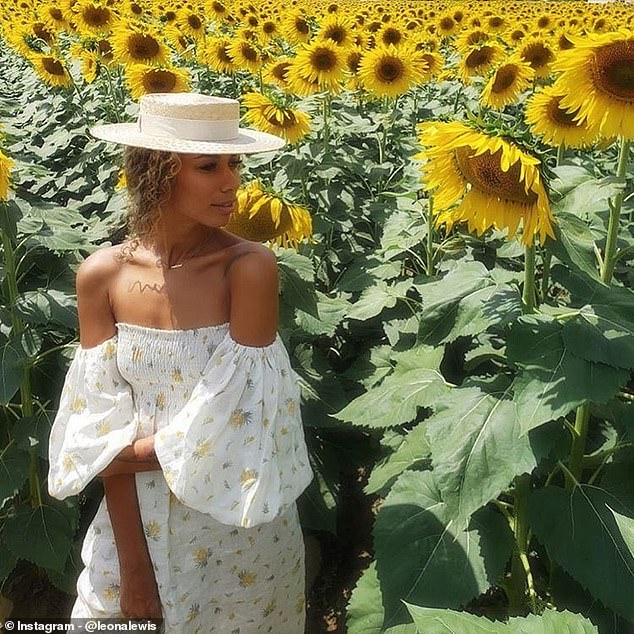 Leona Lewis, who shot to fame on The X Factor in 2006, is a huge fan of Sleeper, especially the Atlanta linen dress in its Mimosa print 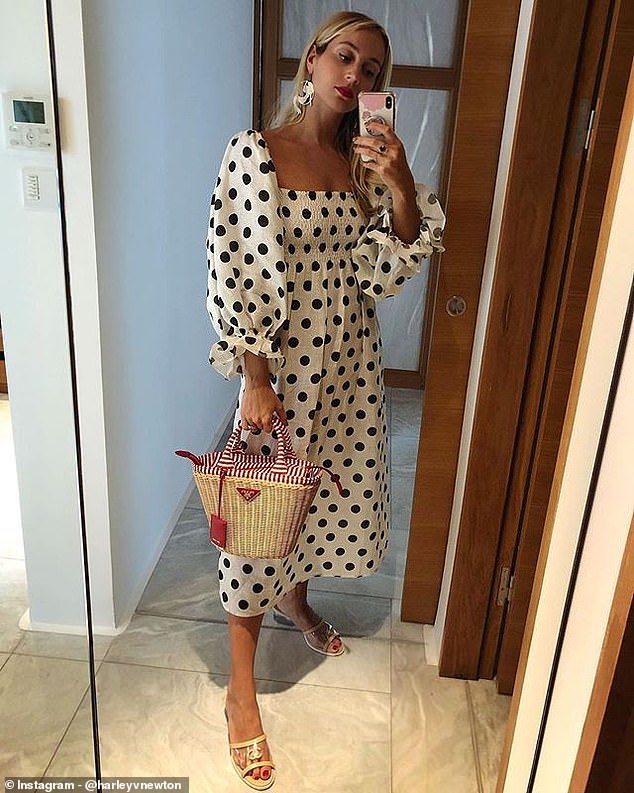 The Atlanta dress, which boasts a mid-length cut, elasticated chest area and cuffs, as well as puff sleeves, can be worn as a bardot style or pulled up onto the shoulders like model Harley Newton

The mid-length handcrafted dress also boasts puff sleeve detail, which could be pulled down and worn to achieve the bardot look, or worn to cover the shoulders.

The sleeves are another huge talking point, as the elasticated cuff can be worn down as a long sleeve to show off the dainty detail, and also styled to look like it has short billowy sleeves when pulled upwards towards the elbow.

If that isn’t enough, a head ribbon also comes with the frock to make accessorising the full outfit easier.

The popular style comes in various prints, such as the cream with yellow ditsy print named Mimosa, which is a favourite of The X Factor 2006 winner and High School Musical actress, as well as a pale blue version entitled Linum that Dakota can’t get enough of. 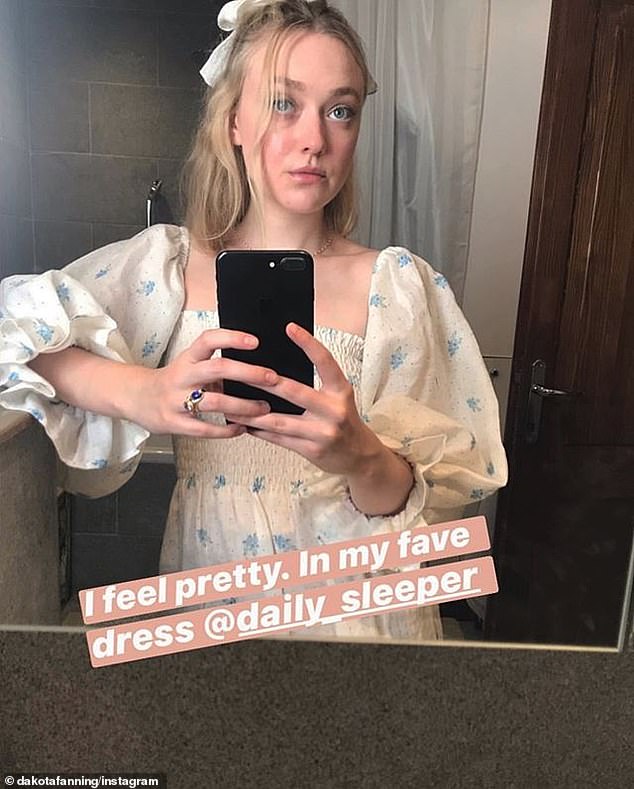 Dakota Fanning has shared her love of the American label, as she has stunned in the Atlanta Linum style of the highly-coveted design 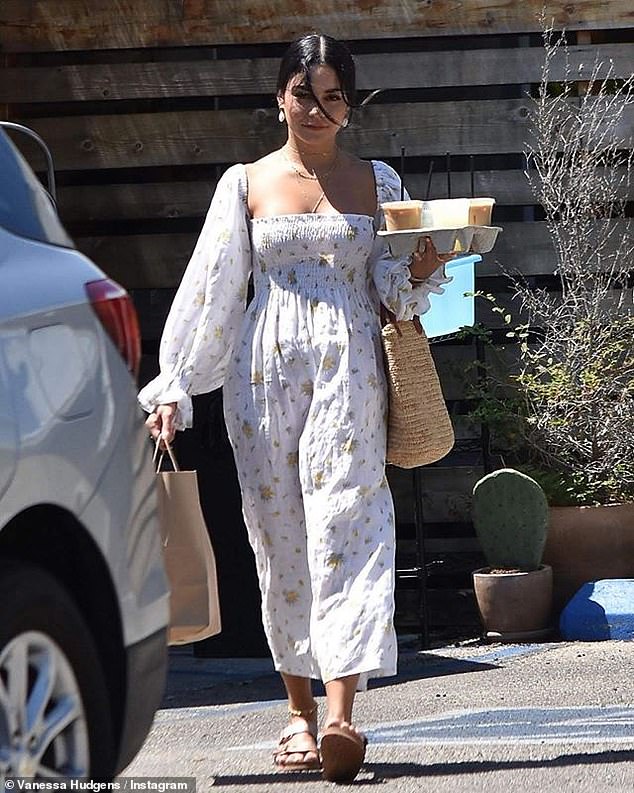 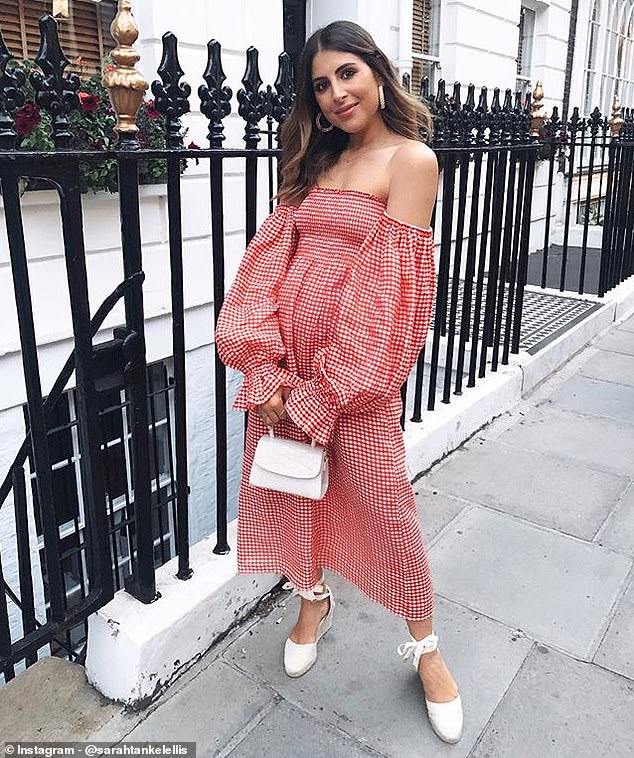 Influencer Sarah Tankel Ellis, who makes up one half of We Are Twinset, shows Sleeper’s red gingham Atlanta dress can be glammed up for special occasions as she completes the look with white wedges and a miniature handbag

The brand has also released a red gingham version of this season’s must have – which is loved by actress Lena Dunham – as well as a cream and black polka dot, plain navy and pale pink style.

Leona, 34, loves the brand so much she has two dresses –  the block blue shade, as well as the Mimosa look.

During a trip to Rome, Italy, Leona wore the midi dress and admitted it was her number one choice. She captioned the Instagram post, which has racked up over 20,000 likes: ‘My favorites.’ 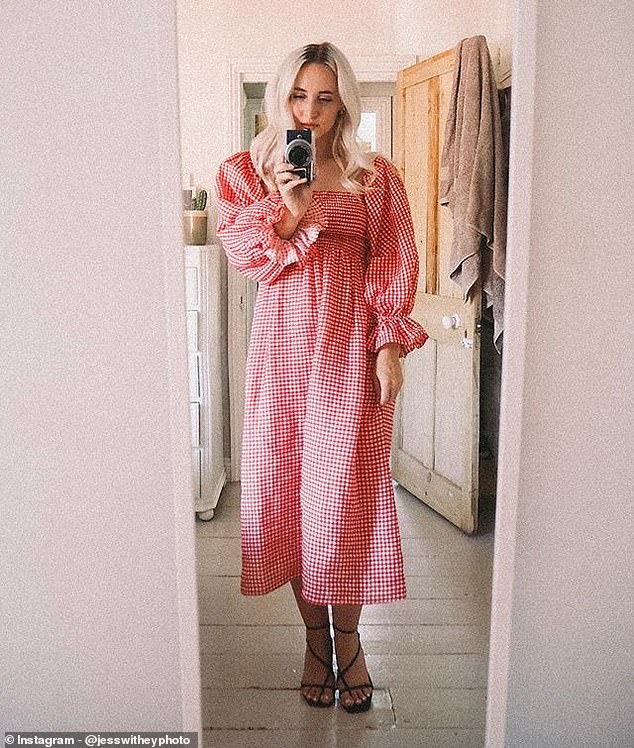 Influencer Jess Withey also stunned in the printed Atlanta dress, which has now gone on sale on the brand’s website 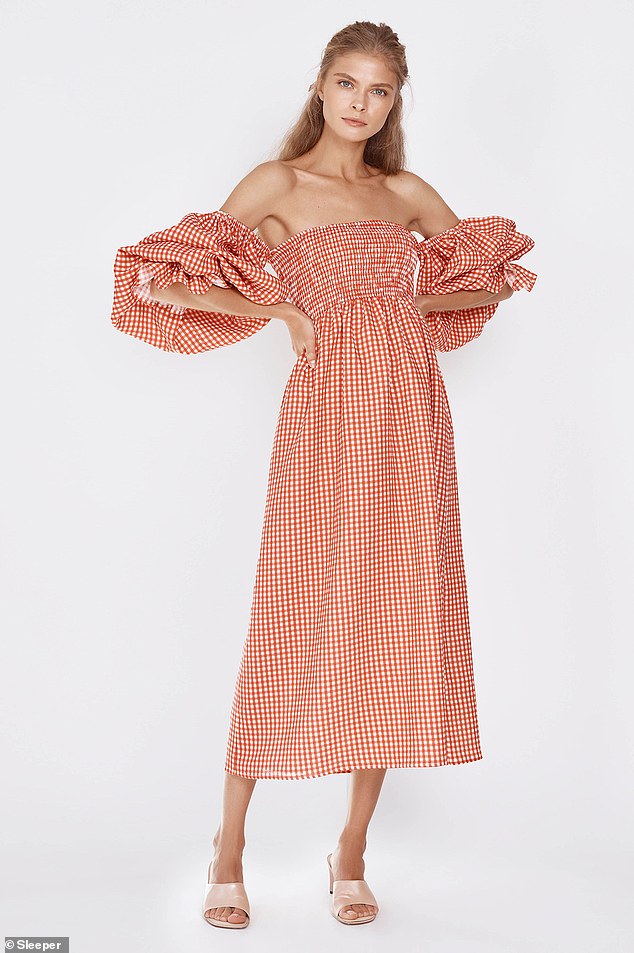 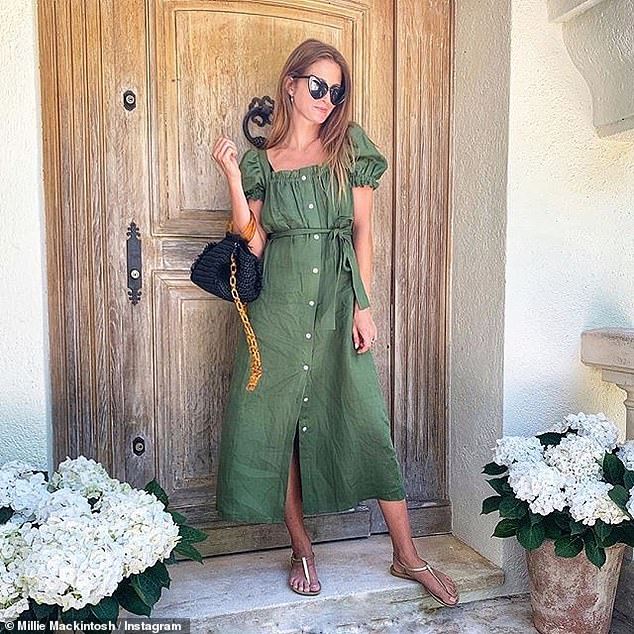 Made In Chelsea’s Millie Mackintosh has pledged her allegiance to the brand as she stuns in the Brigitte dress, which looks very similar to the Atlanta design with the puff sleeves and mid length, although it boasts extra detail with the buttons and tie front 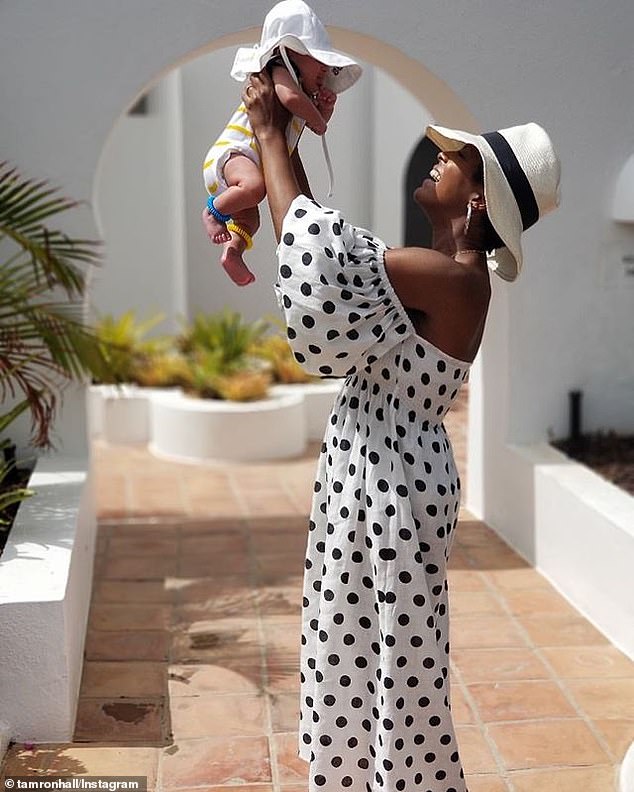 Tamron Hall looks sensational in the polka dot design on holiday. She has styled the dress to resemble a bardot dress with the sleeves pulled down past the shoulder and the cuffs drawn up for a shorter sleeve 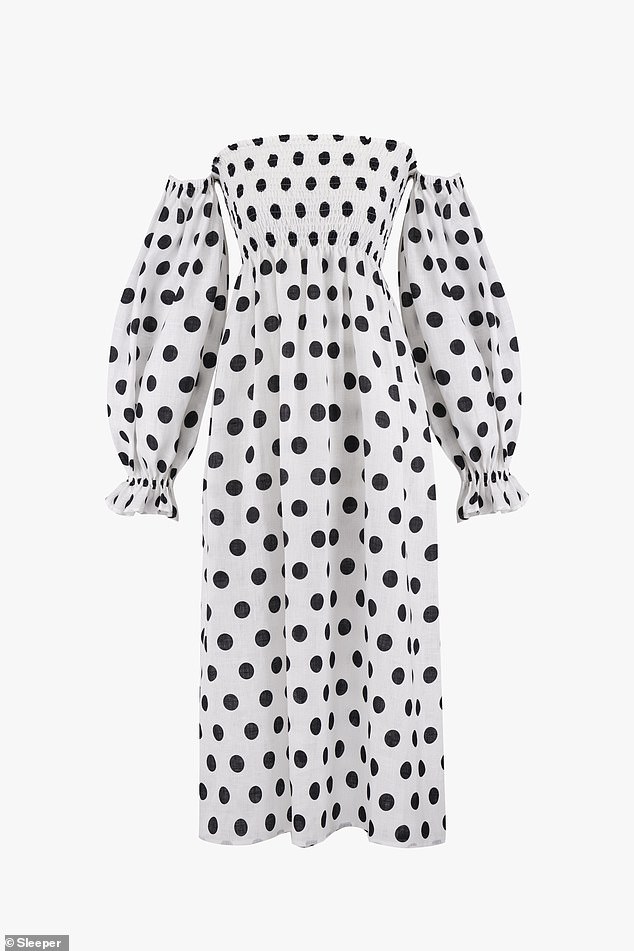 The Atlanta design can be styled in various ways, with the cuff pulled up to add volume to the puff sleeve, as well as worn down as a long sleeve dress, and even off the shoulder

Instagram influencers have also shown off the item on their social media, including We Are Twinset co-founders Sarah Tankel Ellis, Philippa Bloom, The Little Magpie internet sensation Amy Bell, as well as Chloe Montana, We Wore What blogger Danielle Bernstein and Claudia Berresford.

The popular purchase originally retailed for $320 USD, which is approximately the equivalent to £262.59, however it has since been slashed in price to $224 USD. 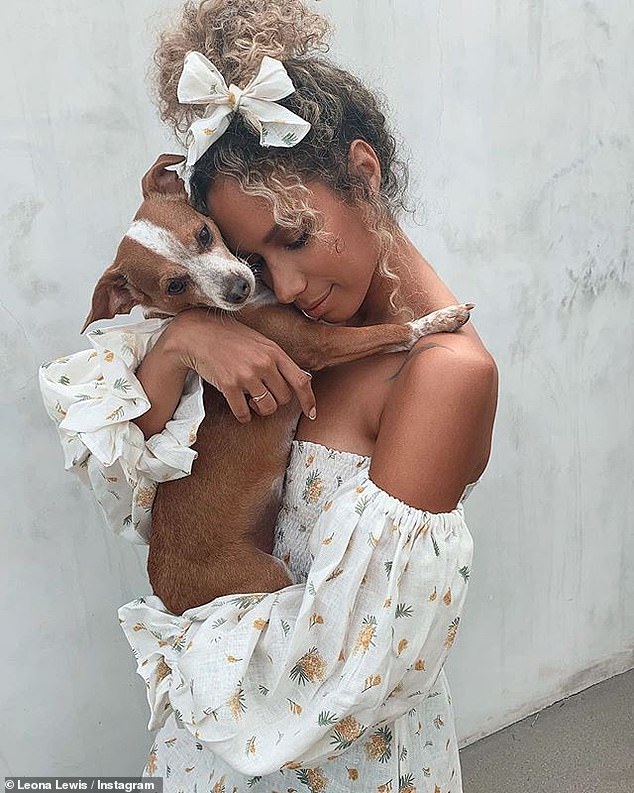 Leona has the Mimosa dress, which proved to be a huge hit on her recent holiday to Rome. The singer completed the look with the matching bow tie, which she wore in her hair 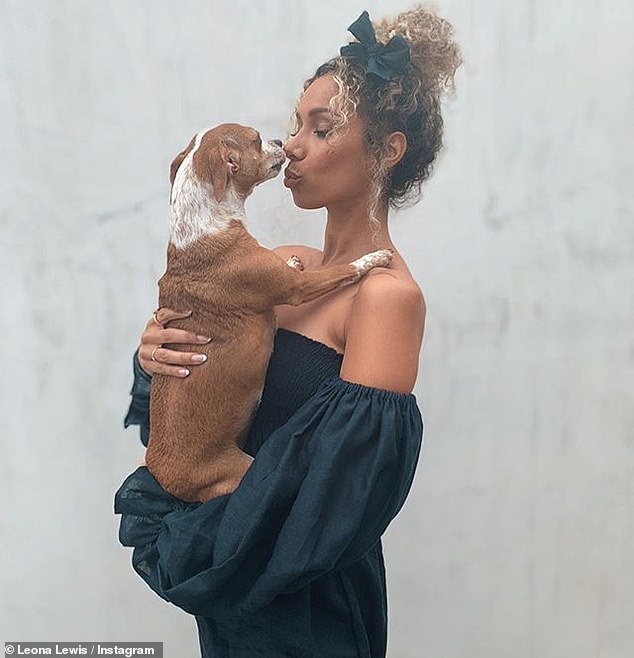 Leona also has the block colour of the same design, and stunned in the navy version of the popular design

The multifunctional design, which was created by co-founders Kate Zubarieva and Asya Varetsa, was inspired by the ‘summer months’.

The site reads: ‘When creating this collection we have, of course, thought of summer, vacations, a beach, and late dinners with friends at coastal cafes.

‘We wanted to create something elegant, something to celebrate life, suitable to walk along the beach and party with friends.’ 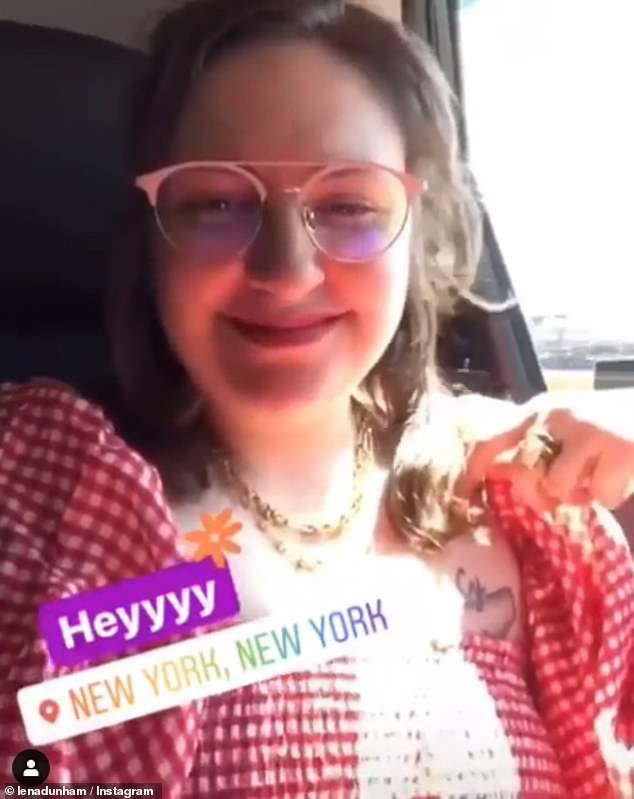 Former Made In Chelsea star Millie Mackintosh also has a soft spot for the company as she has been spotted wearing a very similar design, the Brigitte.

Similar to the Atlanta, the Brigitte dress is mid-length and has short puff sleeves, although they are in a fixed place, and it has the added details of buttons down the front, as well as a waist band around the centre.

Sleeper has catered for everyone’s needs as they also stock a mini dress version of the Brigitte style, and a slip dress with feather detail on the hem, which also comes in a two piece trouser and shirt co-ord. 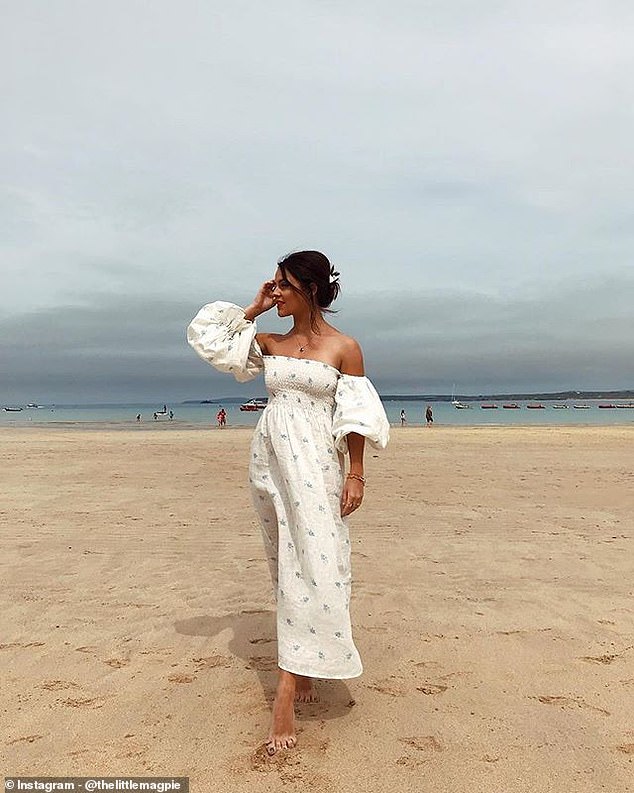 Blogger Amy Bell, who is known as the Little Magpie on Instagram, looked sensational in the Atlanta dress which had the blue floral print emblazoned on it 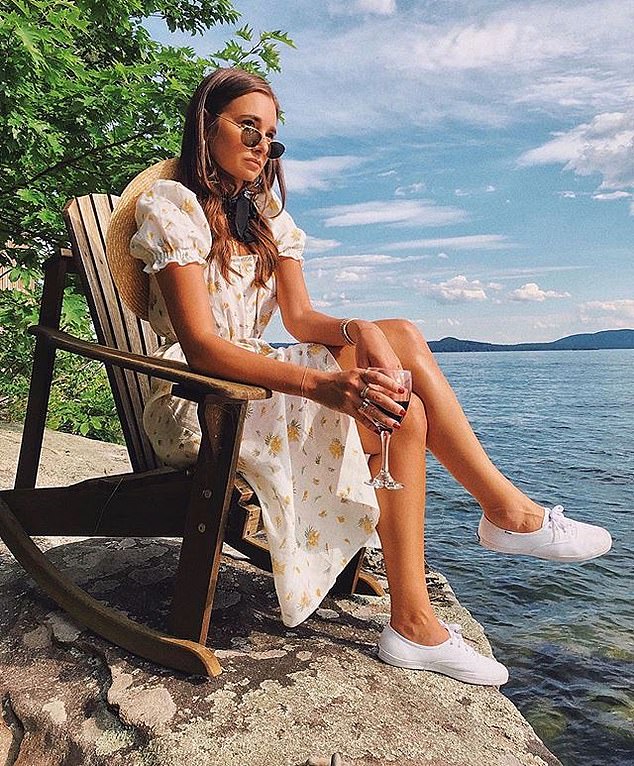 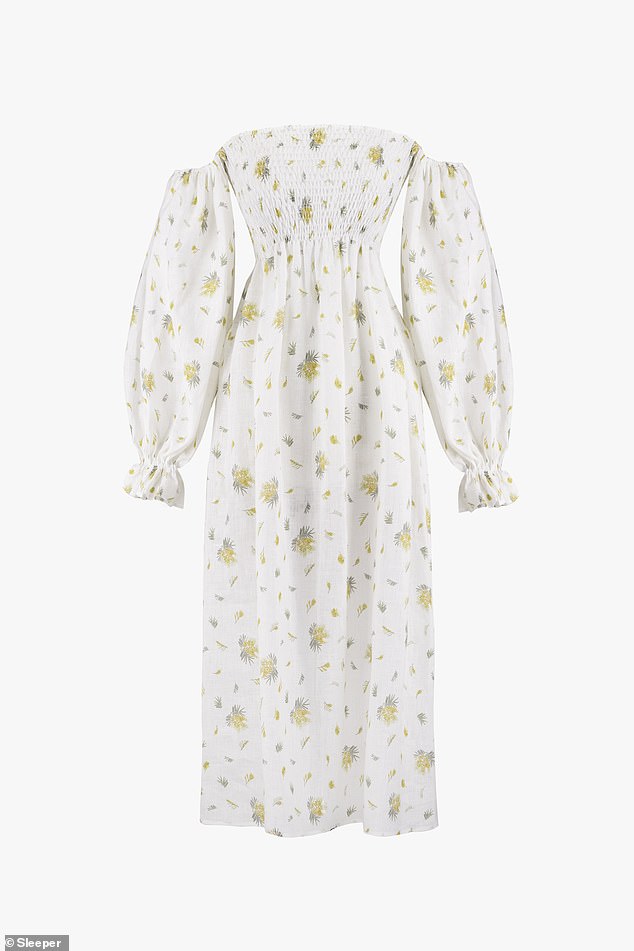 The Atlanta dress has been slashed in price, as it previously retailed for $320 USD, but is now in the sale for just a fraction of the original cost 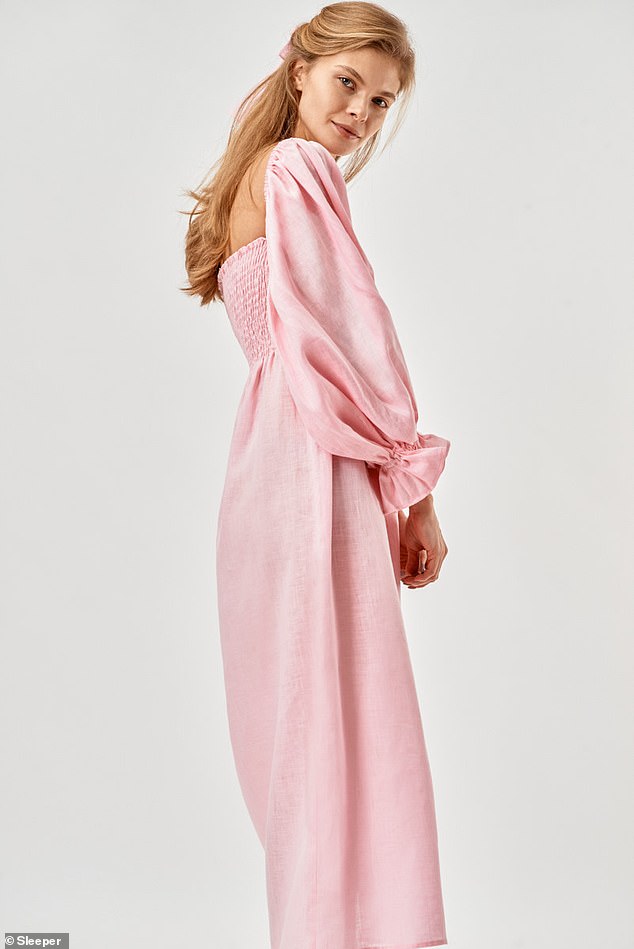 The company have recently launched a unisex clothing line, complete with linen robes, trouser pajama sets, as well as a short version, printed loungewear dresses, and suits, and tie-up bags and slippers.

Kate and Asya launched the brand, which has enjoyed global success, and is available in stockists across the world, in 2014 after a dream about pajama.

The site reads: ‘Sleeper was launched in 2014 by two former editors Kate Zubarieva and Asya Varetsa.

‘One of the founders had a dream on Christmas night about her standing in the middle of a pajamas factory.’