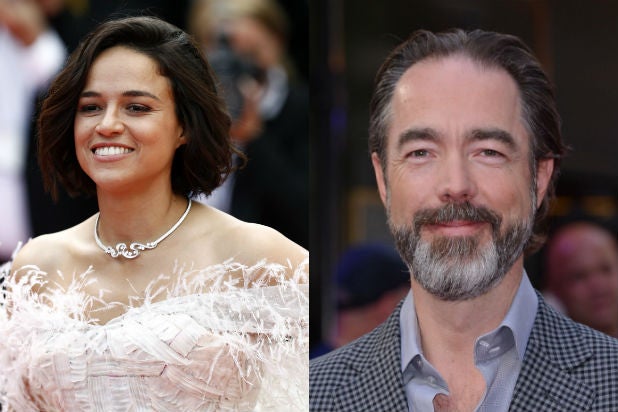 Michelle Rodriguez did not mince words in a Monday night tweet about writer Chris Morgan, who is best known as the screenwriter for most of the “Fast and Furious” movies and the just-released “Hobbs & Shaw” spinoff — but not the upcoming “Fast & Furious 9.”

In the tweet, Rodriguez linked to an interview Morgan gave to Entertainment Weekly in which he promised fans that the franchise will eventually directly address #JusticeForHan, and she delivered some harsh words in response: “I’ve been around since the beginning way before Chris Morgan came along & he has absolutely nothing to do with where this narrative is or where it’s going FYI.”

Fans began the #JusticeForHan refrain upon the release of “The Fate of the Furious” when Jason Statham’s character, Deckard Shaw, became a protagonist character even though he had previously murdered Han Seoul-Oh (Sung Kang), a fan favorite character who featured in four of the previous movies. Their concerns were not really addressed in “Fate,” though that film did at least put Shaw into a situation in which he had to take a particularly heroic action — saving the baby son of Dominic Toretto (Vin Diesel) in one of the best sequences in the film.

In the EW interview, Morgan promised that Deckard Shaw’s “super-arc” would deal with with the #JusticeForHan situation directly, though “Hobbs & Shaw” does not. Morgan said that Shaw has one line in the film that referenced Han’s murder — “There’s things I’ve done that I have to make amends for” — but the spinoff notably contains very few meaningful callbacks to the main series.

Neither Statham nor Johnson are slated to appear in “Fast 9,” and Morgan is not creatively involved in the film, having been replaced by “Kin” screenwriter Daniel Casey while Morgan went with Johnson over to “Hobbs & Shaw.”

Rodriguez has been a major player in five of the “Fast and Furious” films, dating back to the 2001 original. Morgan first joined the franchise on the third film, “Tokyo Drift.”

Universal Pictures and reps for Rodriguez and Morgan did not immediately respond to requests for comment about Rodriguez’s tweet.

This isn’t the first time Rodriguez has been vocal about her dissatisfaction with aspects of the “Fast and Furious” franchise. In 2017, on the day of the “Fate of the Furious” digital home video release, she said on instagram that she might leave the series altogether unless “they decide to show some love to the women of the franchise on the next one.” Presumably her concerns have since been addressed: She is returning for the upcoming ninth film, and the first main cast pic was released to celebrate her birthday.

It’s no secret that Vin Diesel and Johnson had some kind of beef going during production on “Fate.” Judging by the level of open animosity Rodriguez is displaying toward Morgan here, and with Morgan leaving the main series after “Fate” to write “Hobbs & Shaw,” it seems plausible the creative conflicts on that film weren’t limited just to the two hulking stars.

It’s never been clear what exactly the conflict between Diesel and Johnson was about. But Johnson has admitted openly in a now-deleted Instagram post that it was a severe enough rift that, “When you watch this movie next April and it seems like I’m not acting in some of these scenes and my blood is legit boiling–you’re right.” Johnson later chalked up the whole thing to “a fundamental difference in philosophies on how we approach moviemaking and collaborating,” which could mean just about anything.

'Hobbs & Shaw': The 17 Craziest Stunts from the 'Fast and Furious' Franchise (Videos)

With “Hobbs & Shaw” hitting theaters this weekend, TheWrap takes a look at the wildest scenes from the last 18 years of the franchise